Life, Death and the Seasons, part 1

Sorry, it's been a while. It's not that I haven't been taking pictures or thinking of fabulous one liners for the blog. It's just that one, I have been too busy/worried/hot to even think about sitting down and writing out my thoughts and two, the story of the farm and its occupants has been moving along so fast I have quite frankly been overwhelmed with all the things I should have written down. I like data, but unfortunately for my science career I am a poor data logger. But enough about me, this is a garden blog after after all, on with the pictures and the highlights! 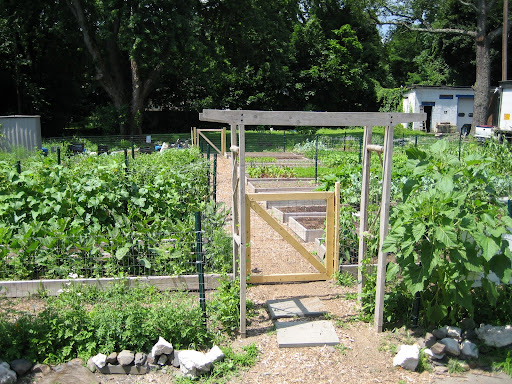 This set of pictures is from about two weeks ago. Maybe three? If I took a picture of it today, everything would either be twice as tall or dead. Some of the new plantings of beans and brassicas did not make it (damn you woodchucks), the cucumbers are still slowly but surely dying and suddenly the weeds have taken over the unmulched paths. But other than that, the place is pretty much going like gangbusters. And don't worry, I am trying my hardest to ensure bountiful fall crops. The broccoli, kale, cauliflower and cabbages have been replanted and a seeding of snow peas has replaced the lack of cucumbers. (Update: my second planting of kale and the fennel has been taken by the woodchuck family, double damn you.) 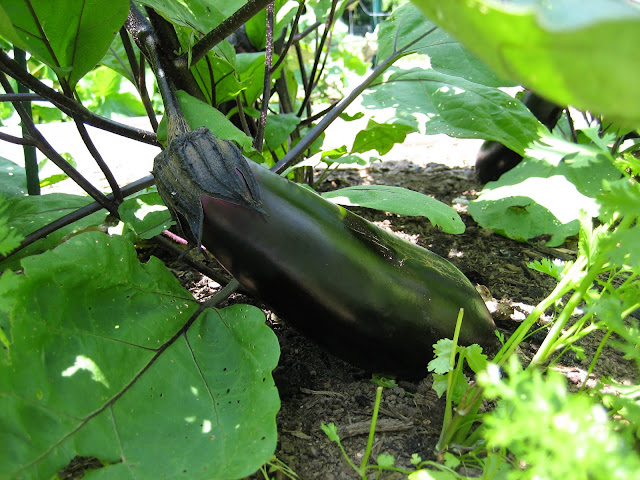 Pretty purple eggplant flowers are replaced by stunningly shiny, inky eggplants. Beyond the normal dark purple American type, I am also growing both dark and light purple elongated Chinese types, a Japanese variety that looks a lot like a dumpling, another variety that is white and green striped and ovoid and finally a miniature variety that has the fruit in bunches like cherry tomatoes. As you can tell, I like a lot of variety in my eggplant. It is such an old, widespread and under-appreciated veggie, I feel it's necessary to have its various incarnations represented. 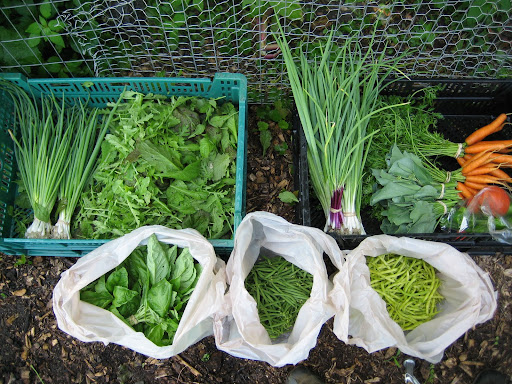 The beans are in big time. The ones above are green and yellow haricots verts. I have the luxury of growing these finicky varieties because I can harvest them thoroughly and often. Without that, the beans quickly become overgrown and tough and the plants think they've done their job of making seeds and begin to go into senescence. I've been pulling bean harvests like this twice a week. As for rest of the harvest, I have been working through the remainder of spring plantings and am now coming into the summer stuff. The squash has come in hard and fast and even with their illness, the cukes have actually proven steady at harvest time. Oh, see that chicken wire at the bottom of the fence? That is the latest in my attempts to keep an entire FAMILY of woodchucks from eating more than their fair share of produce. The chicken wire goes most of the way around now. 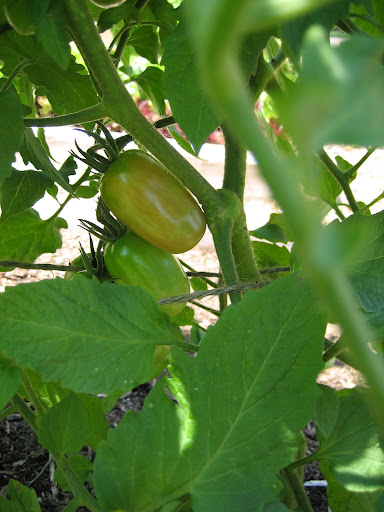 When I took this picture I was very excited to see the first tomato ripening. This variety, Juliet, actually came in earlier than my "early" variety, Moscovitch. But now they are all producing except the late heirlooms. I've got a Striped German the size of my head that I am anxiously awaiting to ripen. The tomatoes have a little bit of something on the bottom of the plants. It's definitely not late blight, but a little troublesome all the same. I think the plants will still produce well, but I'll have to keep an eye on them. 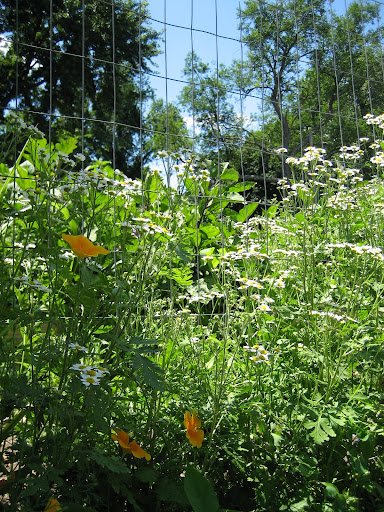 Probably the view a juvenile woodchuck gets before squeezing itself through the fence. I wish someone had told me that baby woodchucks are just as voracious as their mothers but can fit through 2" holes. Next up, my musings about late July and August, a time when my mind is actually on the first frosts of autumn while knee deep (usually literally) in the steamy lushness of summer.
Posted by Jes at 12:06 PM 0 comments

The bees (and pollinating flies and wasps) have finally come to South Pine Street. They took their sweet old time, for most of June I was hand pollinating squashes and sadly watching my unpollinated cucumbers shrivel off the vine (they're trickier to do than squashes). Although the beds were creepy crawling with ants, millepedes and worms, somehow the buzzy insects were having a hard time finding the place. As I was kneeling face deep in the zucchini, it was strangely silent. And then one day, I heard it. Zzzzzzzzzzz.....pth....zzzzzzzzzzzzzzzz. And I looked up. Yes! I saw a little bee butt sticking our of a cucumber flower: 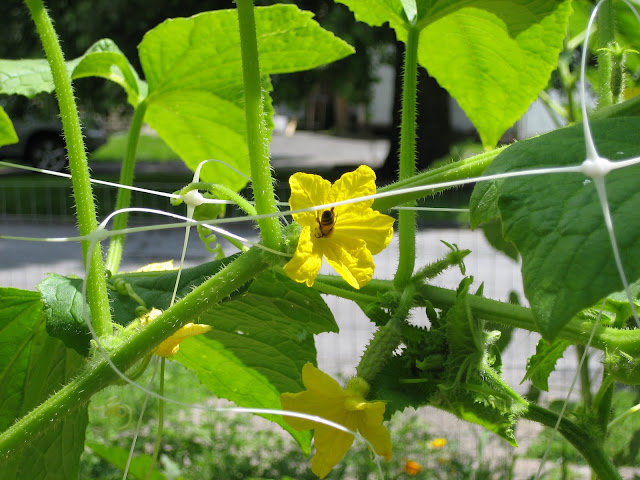 By the way, in case you haven't heard about colony collapse disorder in bees and what that might mean for food production, most of the fruits and "veggie" fruits (think cucumbers, eggplants, tomatoes, etc.) need a pollinator. Members of cucurbit family, such as melons and squashes are especially needy because their flowers are imperfect. This means that each flower is either a male flower or a female flower and they absolutely require a pollinator to act as the intermediary and bring the pollen to the pistil. Most, including myself on occasion, refer to them as being dioecious, but that is an incorrect use of the term because dioecious means that the whole plant itself is either male or female. There, that is your plant geek moment for the day.

So anyways, one bee became five and soon enough there were all kinds of buzzies flitting about the place. I'd like to think that part of the reason for their arrival is the fact that we recently put in the "landscaped area" in the back. Full of flowering perennials, the area has at least two functions. One is to make the place pretty, though as you can see I take pride in the way the crop beds look, and the other is to attract beneficial insects, including pollinators. It was right about the time those plants arrived that I started to see and hear my friends coming to visit. I would also like to think that the honey bees I have been seeing are coming from my neighbor Kate's house. She just installed a new colony this year and I can only hope to contribute to their winter stash.

Unfortunately though, not all bugs are good for plants. Right before I was rejoicing the bees and wasps, I was cursing the cucumber beetles. DAMN YOU CUCUMBER BEEEEETLES! I would be screaming in my head. At least 1/3 of my cucumber plants have bacterial wilt now. Cucumbers, one of my favorite crops in the garden are being taken over by a completely terminal disease spread, for the most part, by infected cucumber beetles that chew on the leaves and then poop it out right next to the open wound. This infects the plants with a bacteria that colonizes and spreads through the xylem, making the plants appear to wilt even though they are getting plenty of water. Within a week or so, the whole plant droops and shrivels up and there is nothing you can do about it but dig it up carefully and dispose of it in the trash, not the compost. The only way to prevent it is to prevent the appearance of those bugs in the first place, which is very hard to do.

This is pretty much what organic farming is. The struggle between the good bugs and the bad bugs. Keeping a healthy ecosystem, but making sure that ultimately, your plants win. I think the cucumbers might have lost this round, but there is always next year. And what is my plan for next year? Probably I will cover the cukes with row cover like I did the summer squash and I will remove it when the plants are big and beginning to flower so that the bees can move in and do their job. Cross your fingers.
Posted by Jes at 8:02 AM 1 comments

Our Theme Song! Thanks to Mark Foley and Volunteer Music