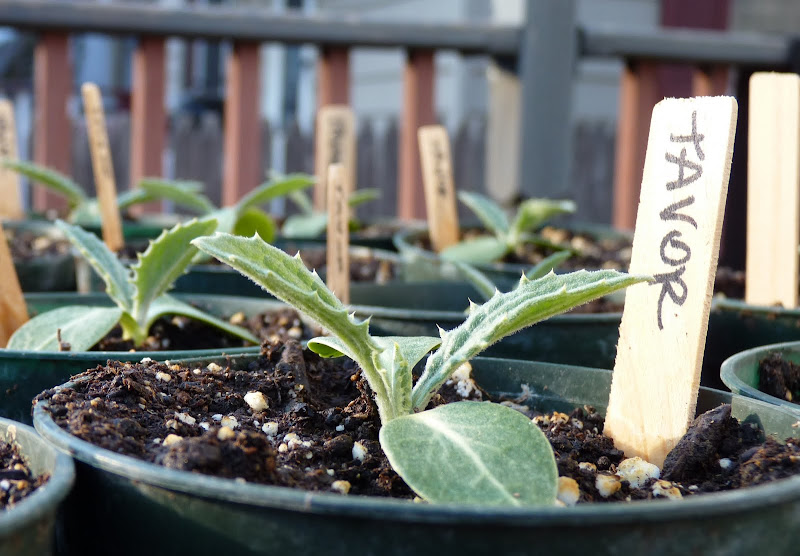 Remember those seedlings I photographed coming up a few weeks ago? Here they are! The artichokes have to go through a vernalization process (i.e. cold weather to fake winter so that the plant thinks it is spring. In this case so that the artichoke thinks it is in its second year) before they will produce the tasty buds we know and love. Actually, this variety Tavor has to go through only 8-10 days with nights below 50 degrees, so I am contemplating taking them back to Phillies Bridge until they are a wee bit bigger and I can maybe install a cold frame at the farm.

Peas, Spinach and more after the cut. 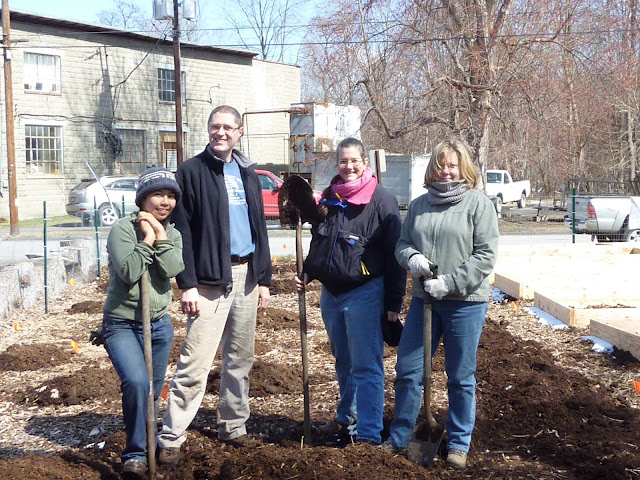 What a week! A dastardly snow storm threatened to wipe out spring as we know it, only to spit out an inch of grossness and then walk away. No matter, I was out there anyways with the help of some brave volunteers from the Holy Cross Monastery. Yes, Brother Bernard had done it again, coming out to the farm full of enthusiasm and this time with mostly enthusiastic retreat participants in tow. I say "mostly enthusiactic" because they usually needed to be plied with coffee first. But once we got going, we really got going, transforming the giant pile of compost into neatly laid beds for asparagus and raspberries, a three sisters garden, herbs and artichokes. We also straightened out the raised beds, aerated the substrate below and even filled the first few beds as the giant piles were delivered on Friday.
You want pics? Here's some pics: 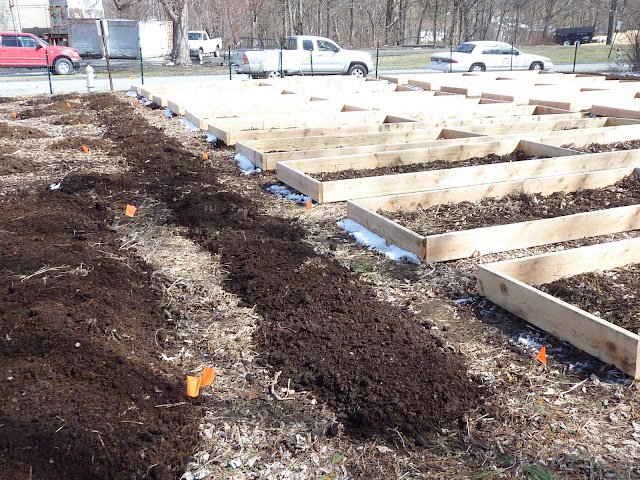 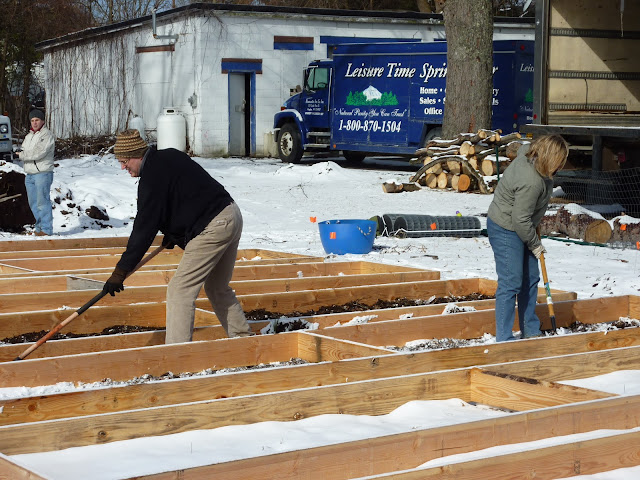 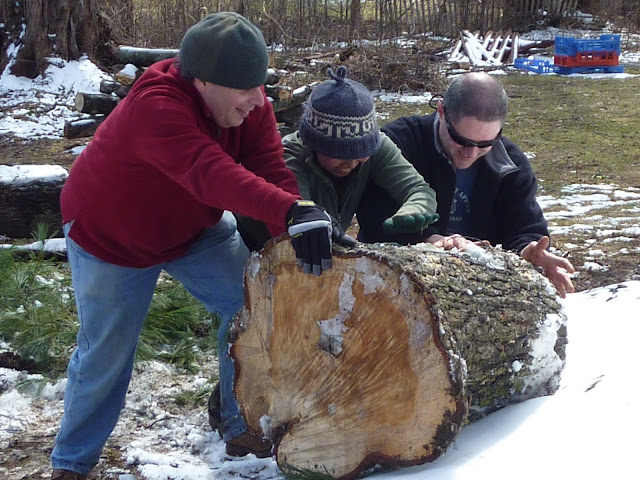 And of course Saturday was the Work Party day. During the week I was convinced that there would be no one there besides me, Daniel and couple of folks that RSVP'd, but lo' and behold at 10am on Saturday I was greeted by four folks dressed in layers and gloves and then they just kept coming! The dirt was flying, the brush was clearing, the mulch was spreading and in the middle we had some hot soup, bread and tasty pickles. Probably the best day that I've had all year. Mostly because without the people that came out, I would probably have stayed at home and sulked over cold temperatures. Thank goodness I put together those wheelbarrows the night before!

Could be an ad for Toyota Tacoma 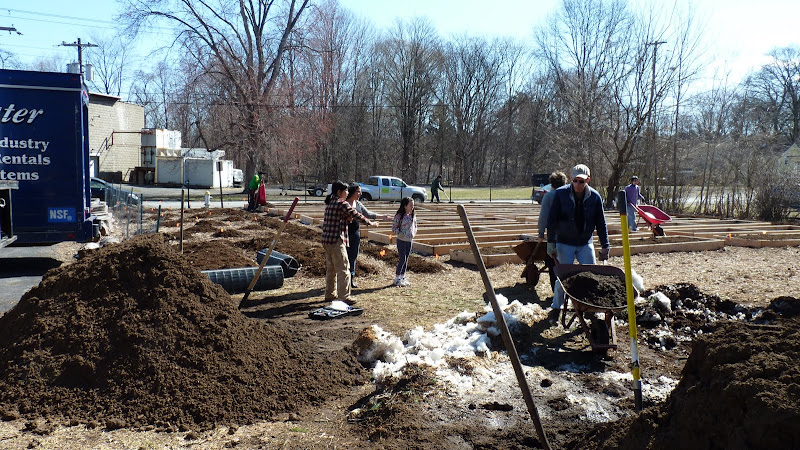 Slowly but surely, two giant pile of dirt went into the beds. Two more pile are on their way 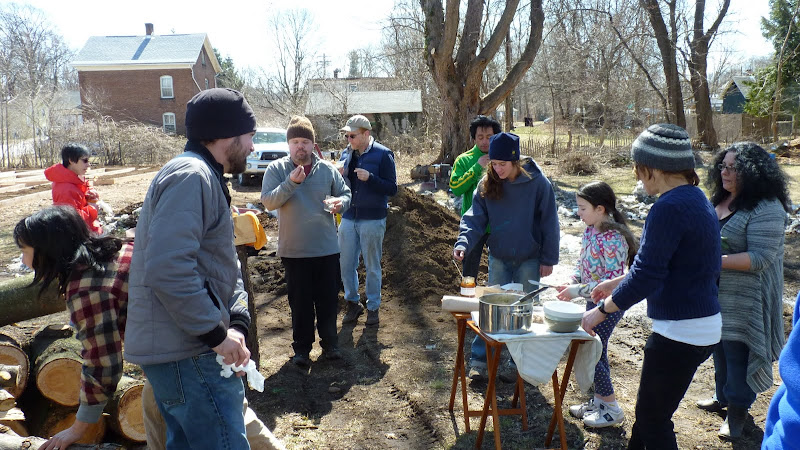 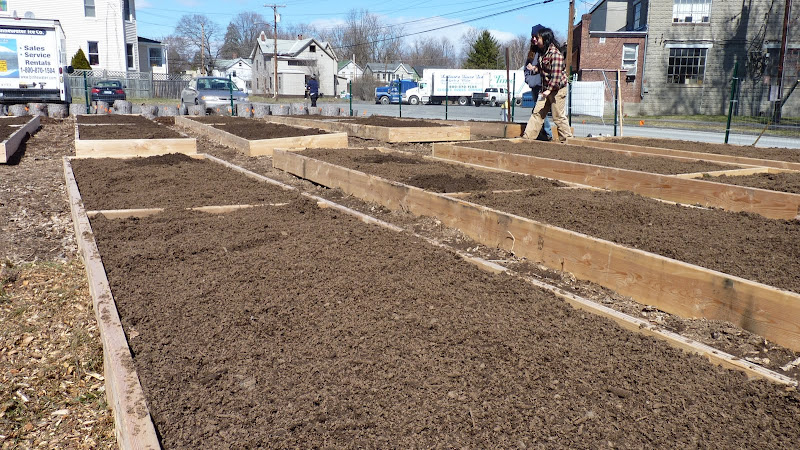 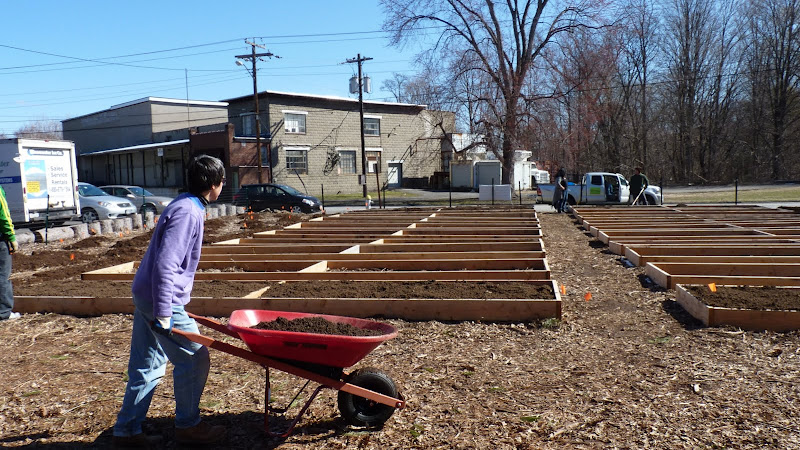 Hmmm....what is the best route? 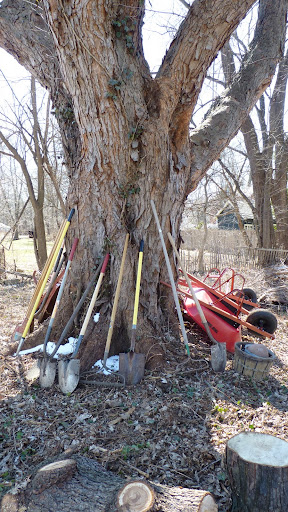 A song garden grows in Kingston

I have to say, at first I was a little incredulous. There is this random person out there that wants to volunteer to write a song about the farm? Our farm? The little one next to Binnewater?

Yes. And you can play the finished version by pressing the play button below.
Mark Foley of Volunteer Music is continuing in the tradition of true folk music. Music for the folks that is. He writes about open space, about historical preservation, about the people and places that make our world the kind of place you don't mind living in. He give free concerts and supports music being heard in all communities. And I suppose he was intrigued to hear about a new greenspace "cropping" up in Kingston, because about a month and a half ago I received an email simply titled: Researching Community Farms.

After an interesting phone call that forced me to think about what was South Pine Street City Farm really doing in the middle of a city and what was I really doing as a farmer, Mark set to work transforming my bits and pieces into a coherent thought. Musicians (my husband being one) fascinate me for their ability to transform thought into emotion through sound. Even when there are no words, you can know what a song is about.

Anyways, listen to the song, pass it along.
Here's the link to the song page and mp3

And, for good measure, why don't you check out Mark's other projects: Volunteer Music and Song Project?
Posted by Jes at 5:07 AM 0 comments

Spring? Not so much

Ok, I know I know, everyone's having their complaints about snow on the first day of spring, but I have to say....the birds are singing, the winds are blowing and I still got a lot done today. I have a feeling I won't have many visitors during Wednesday or Thursday, but hopefully I'll still see some folks on Saturday?
BTW, my mushroom plugs are in, yay!
Posted by Jes at 1:30 PM 0 comments

Email ThisBlogThis!Share to TwitterShare to FacebookShare to Pinterest
Labels: spring

I'll change the background later...On to more important things.  Next week we will officially open the season with a Spring Cleaning.  Wednesday afternoon (3/23) and all day Thursday (3/24) I will be at the garden trimming away some of the last brushy areas, spreading mulch, and in general making the area a tidier place.  If you're around and feel like doing some rewarding work, please do stop by.  For those of you who have never seen the farm, it will be a fine time to catch it before its great transformation.  On Thursday we will also be getting our first big delivery of the soil that will go into our vegetable beds.  I have so much excitement over this, I can hardly contain it!  I almost feel like planting something as soon as we get our first bed filled!  Speaking of which I will also be hosting the first Weekend Work Party on Saturday, 3/26.  We'll be fillin' beds, drillin' holes for mushroom logs and maybe even getting some more debris to the dump.  As always, I'll provide some simple lunch fixin's for the inevitable hunger that creeps in when you're doing hard work.  So please mark your calendars and be at 27 South Pine Street in Kingston, NY on Saturday, March 26th at 10am.  I'll see you there?


Philly Flower Show after the jump.

Email ThisBlogThis!Share to TwitterShare to FacebookShare to Pinterest
Labels: volunteer

I was going to blog about my trip to the Philadelphia International Flower Show, but I got sidetracked by trying to change my background picture using a url instead of uploading the pic to blogger.  I would like it to be centered, fixed and take up the whole screen no matter what size your computer screen is.  If you know what I'm talking about and you know how to do this, LET ME KNOW!!  And in general, if you're an html/CSS wiz, I am terrible at it and totally cheat/fake/lie my way towards a design.  Please teach me the way.
Posted by Jesica Clark at 6:36 AM 0 comments

What an interesting day yesterday! In the morning I met at the farm with two monks, Br. James and Br. Bernard, from Holy Cross Monastery. A very pleasant meeting which carried the potential to increase my sense of community by one more organization. I even got invited to lunch. They are hoping to one day expand the gardens at the monastery to include food gardens, but at this point they are happy to help further my project with their support. As we looked out onto the still snow covered garden, the bed frames just barely peeping up from the blanket, I told them of my plans and goals for the space.

The more I say those goals, the more I believe them, but there is that farmer-doubt that is mixed in with the hope. It will be a better year this year, won't it? I've put in the best fence I could, but what if it's not enough? What if I have guessed totally wrong and everyone will want head lettuce and rutabagas, two things I am not growing? What if? I have to shake it off and remain confident, because what else can I do besides try my hardest? Towards the tail end of the conversation, the monks mentioned the learning of humility and I replied that nothing teaches humility better than farming (actually, what I said was nothing teaches humility better than carrying a wheelbarrow full of manure around, but same thing). We plan and we prepare. We take educated guesses and we do market research. We buy soil amendments and organic seeds. But in the end it's not really up to us. And we can't even cheat, because we'll surely get caught by mother nature.

A few days of warmth and finally it feels like we're heading towards spring.  It also helps that I have started the first few seedlings for the farm and they are finally up!  Spoiler alert: these next few pics will mostly look like dirt. 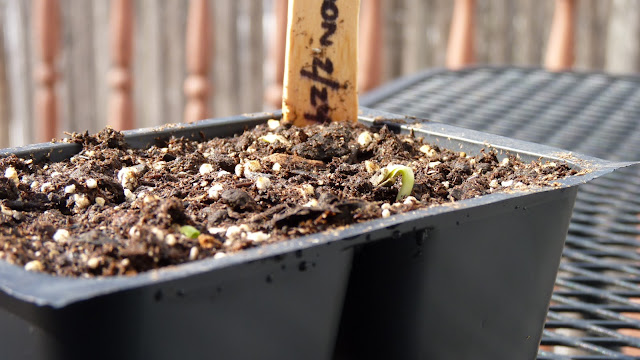 Our Theme Song! Thanks to Mark Foley and Volunteer Music